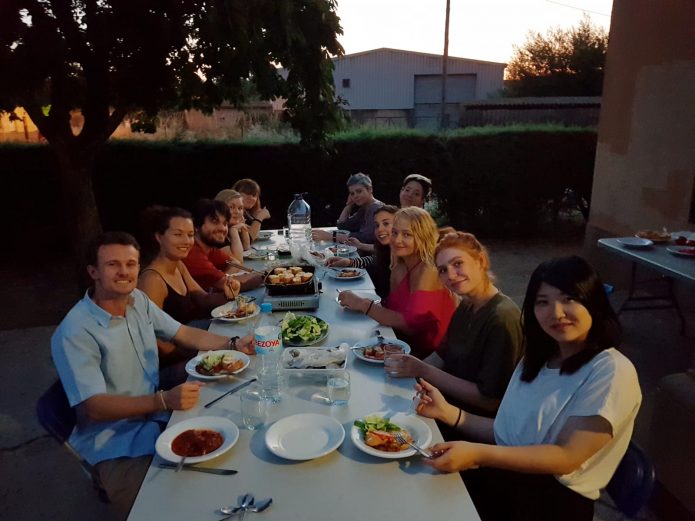 Doing voluntary work among inmates in a prison can really shake you into seeing the effects of inequality and priviledge. It can also help you see the importance of giving voice to those who are usually invisible. Read below the experiences from a camp where volunteers worked with 18-25 year old inmates in Spain.

Bonding with the inmates and seeing their everyday life while volunteering at the young men prison, Centre Penitenciari de Joves, in Spain was both one of the greatest and one of the heaviest experiences I’ve had during my 29-year history. Having had the luck to be born in a loving family in Finland I have never faced a situation when I would have needed to think how to make sure my family is safe or how to ensure we have food also tomorrow. Knowing that everyone is not this privileged and sometimes hard situations in life may leave us very few options to survive was one of the main reasons why I chose to volunteer to help prisoners – people who often are ignored and invisible in our society.

The volunteering project took place in Granollers, Spain during the course of 10 days. We were a group of 12 people: two coordinators and 10 volunteers from different countries. The project is suitable for anybody above 18 years of age and hence the age range of volunteers was between 19 and 50+. We all came from very different backgrounds me having a master’s degree in international business, a few being teachers, and a few having just finished their high school. In other words, your background does not matter, you can participate if you just have an open mind and respect towards the inmates.

We were living in a community center and walking approximately half an hour to the prison every morning during the week. In order to avoid any issues with the inmates, we were only allowed to wear clothes that cover our knees and shoulders during the work days, which made the morning walks in a 30+ degree heat quite an exercise! Once we got to the prison around 9.00, our passports/ID cards were checked every morning in order to register us as visitors. After each one of our 12-people group had been registered, we left all our belongings – including water bottles, passports and mobile phones – in the lockers and went through the security. This meant that we were not able to take photos during our time at the prison nor could bring anything to the inmates.

Once in the actual prison premises, we started our mornings doing gardening with approximately 20 inmates. All of the inmates in this prison are male and between 18-25 years old. Each one participating to the project had been handpicked by their social educators based on their behavior and suitability to interact with different people. During the mornings, we were digging potatoes, watering plants and building a BBQ area together. Obviously, these types of activities are easier to do with proper tools like pickaxes and shovels which we had at our disposal. If you are wondering isn’t it risky to put inmates, outsiders and heavy tools together, I can assure you I never felt unsafe. All the tools were carefully counted after the use and the inmates were very respectful towards us at all times, and ensured we had enough rest and water during the hard work.

The first moments of every morning in the prison felt always a bit weird as asking the normal how was your evening? felt so stupid knowing that the guys had been in their prison routine. It was also a bit pointless to talk about what were their plans for the afternoon or for the weekend. Knowing that their freedom of choice was limited, I sometimes felt uncomfortable telling for example that we volunteers had been to Barcelona during the weekend. However, keeping the small talk short allowed us to spend more time on meaningful conversations like what kind of plans they had for their future or what respect means to them. The gardening was a great way to do something together, share from ourselves and forget that our everyday lives look very different right now.

After the gardening session, we volunteers had a small break for coffee while the inmates had a chance to go to the pool or take a shower and get changed as the work was quite physical and the heat really made us sweat. After the break we gathered together again for the early afternoon hours. Some of the inmates were the same in the afternoon as in the morning and some of them were different. During the afternoon we played some funny games to get to know each other’s and to laugh it out. The point was to have a relaxed atmosphere where we could just share a moment together without prejudice. One of my favorite moments was when our Japanese volunteer was teaching us how to do origami. Most of the inmates were very focused on the task and really tried their best when folding a paper swan. I was really bad at making my origami swan and once the guys noticed that, they were really putting effort in trying to help me make it as beautiful as possible.

Once we had our activities done, we had the pleasure to eat lunch together. Most of the inmates were originally from different parts of Latin America, some of them were from Morocco and only a few from Spain. Anyway, the main language used during the project was Spanish as many of the inmates don’t really speak English and communicate with their social workers in Spanish. However, me and some other volunteers spoke Spanish well enough to translate and to ensure all the volunteers were included in the conversations over the lunch table. After enjoying the same food the inmates are normally served, it was time for us to clean the lunch room and head back to the community center around 14.00.

Afternoons and the weekend during the project were basically free time for us. Sometimes we had some team building activities and reflection exercises within the group of volunteers. Every evening a few people were responsible for cooking for the whole team, so we got to taste cuisine from different countries and have great dinners together. The inconvenience of living in a community center was that there was no proper kitchen but instead we were cooking outside with portable stoves and washing our dishes in the toilet sink. Other than that, the place was okay to stay at as we had access to WiFi, good mattresses (actually borrowed from the prison) to sleep on as well as air conditioning and warm showers.

A 10-day project may sound like a short one, but I would say it is an ideal length for this kind of a project. As much as I enjoyed being in the project and spending time both with the inmates and the volunteering team, it was psychologically exhausting as I found myself pondering on life on many evenings before falling asleep. That is why many of the afternoons were very relaxed and we found ourselves reading, napping or having a coffee in the small centre of Granollers instead of heading again to e.g. Barcelona which was a short train trip away.

I am grateful of having heard the stories of some of the inmates about where they come from and what kind of a situations led them into committing a crime, but it made me think how unfair life sometimes is. The experience definitely strengthened my view on people not being either good or bad people but instead people who have different circumstances and hence end up into different situations. I truly feel like it was meaningful to spend time with the inmates and both parties gained a lot. I bonded better with some of them than I’ve bonded with some of my colleagues at work, which only shows that being in a prison or one’s nationality is not the determining factor of who we are.

Sometimes when the inmates opened up and told their personal stories I felt really helpless as I couldn’t do much for them. However, the biggest thank you was that the inmates told us in the feedback session during our last day that they felt like we had taken them out of the prison for the seven days we spent with them. They were able to share with us things that they don’t talk with each other’s. They were also able to laugh, break their routine and most importantly not to be invisible. If you have the power to give someone their freedom back for even seven days and that way make it easier for them to rehabilitate and gain their life back, why wouldn’t you volunteer for that?

Due to safety precautions we were not allowed to reveal our full name or any contact information to the inmates. Hence, I have no means of knowing how they are doing and how their life will turn out once they get out. From the bottom of my heart, I really wish all the best to each inmate I had the privilege to meet with during the volunteering project and I would be glad if our paths crossed again somewhere.