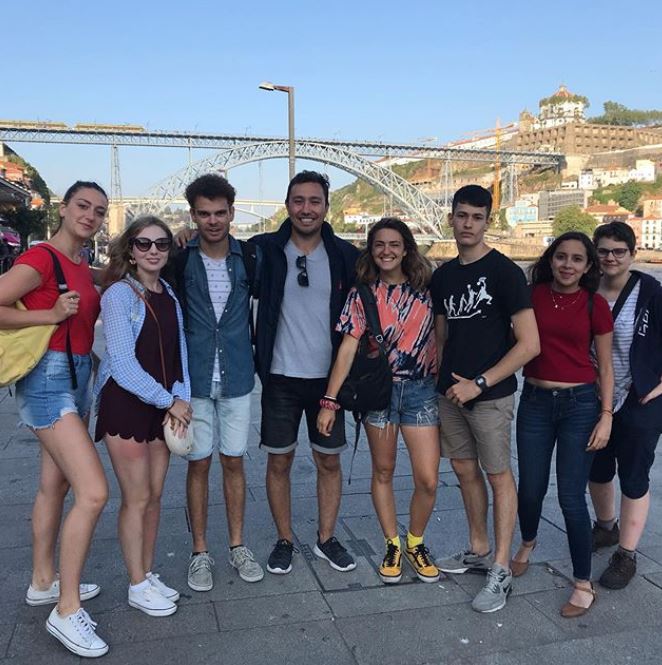 Our volunteer participated in a voluntary workcamp in Portugal. In the camp their aim was to increase awareness of the Moorish heritage in Porto among the volunteer group and also to help create materials for informing tourists.

My name is Erdem, I am writing from Helsinki, Finland. I have started to live in Finland about 3 years ago. I born and raised in Turkey. After my graduation from Istanbul Technical University in 2013 I moved from Turkey to different countries for work.

My first volunteering experience was while I was studying in 2011. I don’t remember how I end up at the camp in Sevilla, Spain at the archeological camp. But I remember looking for new adventures brought the idea to try something like this. It was one of the greatest experiences of my life. So, after many years from my first camp, in 2019 I decided to take a part in another volunteering organization. I had 2 weeks off from work, so I was looking for somewhere to have vacation. Then I think why not a volunteering camp in warm country which would be more affordable, exciting and fun. So, I end up at the camp in Porto, Portugal about the Moorish Heritage in Portugal. I didn’t even know what Moorish was before I join the camp. I just like the sound of it and the city of Porto. It is one of the best places in Europe to visit. And I think now I know much more about Moorish culture.

Both camps were unforgettable trips for me. Volunteering camps are usually based on the increasing awareness of collaboration among the people who are from different countries. During the camps usually its possible to find opportunity to discover local culture and the people. Leaders at the camps are usually locals which helps a lot to gather information about the attractions in the area.

Each volunteering camps are unique so one shouldn’t be expecting same things. It would be also wrong to compare one to another. So, while you are choosing the camps, I suggest considering estimating the age groups who are attending to the camps. Last camp as being 30 years old, I was 8 years older than the next oldest volunteer.

Porto camp aimed to increase the awareness of Moorish culture which is so important for Portugal and Southern Europe.  We were about 10 volunteers from 6 different country. First day we scheduled the timetable for the camp which was 10 days. As a result of work, we recorded a video around the Porto and introduce the Moorish culture and its effects in Porto history. In addition to that we arrange a free city tour guided by volunteers to the locals and tourists who are visiting Porto. In order to gather people to tour we had PR work, couple days at the city center. I would like to say that attendance was tens of people, but it wasn’t 😀 But working together with volunteers and a group of people increased the team awareness and we had lots of fun. And I hope our videos are somewhere watched by someone.

Living conditions at the camps are so much varied according to the organization and the location. In both camps we all volunteers stayed at the same room and slept at the floor, but it brought big fun to our trip. Do not expect to have best food from the organization, but  you can wish to have volunteer with good cooking skills. We had planned our dinners in a way that every evening different volunteers are preparing the food and it was mostly from their home country. And other groups were washing the dishes.

After all I suggest to everyone to experience by your own. Either way every camp brings lots of experiences and joy. And as a last suggestion: do not keep reading million of blogs or some other people’s experiences, go and get your own than you can tell about later.

Have a great journey.